Under the skillful guidance of Vice Echanson Michael Thomson, our Mondiale events have become an educational opportunity as we are introduced to wines heretofore unknown to most of us. On June 19, 2018, Dr. Thomson continued this exploration at the Cuckoo’s Nest Restaurant in Albany for 22 adventurous Mondiale members and guests. How this all came about is best expressed in our Vice Echanson’s brilliant invitation letter, a portion of which is quoted below.

A long time ago, in a galaxy far, far away, faithful companion and I crossed the border from Spain into the Southwest corner of France. It turned into a dark and stormy night, and by the time we arrived where we were staying, the sidewalks had been closed up. Even worse–so had the restaurants. Hitting the streets in what threatened to be a fruitless attempt to forage for something to eat, our hopes were lifted when we found ourselves on a road marked “Route du Fromage.” Going a little further, we then found a sign posted next to a small house: “fromage vendu.” Though encouraging, the house was dimly lit, set back from the road and looked unoccupied; it could be the residence of a French Norman Bates. Hunger overcame trepidation, and we knocked on the door–which was opened by the gentleman cheese maker who lived there, who proceeded to kindly and matter of factly sell us some cheese for our supper. That was my first introduction to Irouleguy, the appellation that we will explore at our upcoming wine dinner.

At the dinner we were introduced to three Irouléguy wines from Domaine Arretxea: a white, a rosé and a red. The white was comprised of 60% Gros Manseng, 35% Petit Manseng and 5% Petit Courbu, not exactly household varietals, but the wine did find its supporters and went well with a delectable crab cake. The rosé, paired with a generous helping of fried chicken, was the most popular of the three and was a blend of Tannat and Cabernet Franc. It was my opinion that if one were blindfolded when tasting this wine, it might be mistaken for a red wine. The short rib was accompanied by the Rouge Haitza, a combination of Tannat and Cabernet Sauvignon. This was (to put it kindly) an unusual wine that no one would mistake for a Bordeaux.

But as a result of our tasting and dinner, when some wine snob broaches the subject of Irouléguy, our now knowledgeable members can reply “Oh yes, the wines from the Basque area of France and Spain. I have sampled several of the wines from Domaine Arretxea and particularly enjoyed the full bodied 2013 rosé”. That should shut them up. 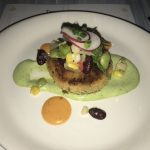 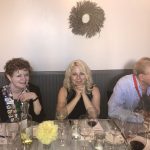 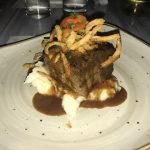 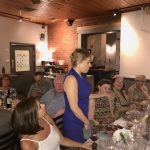 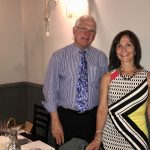 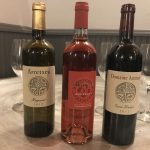